You are here: Home / How to Hire a Property Manager / 3 Ways a Landlord Can Split the Utilities

Renting your rooms out or having roommates are two great ways to live rent free. The simple act of putting up with others in your space is a form of sweat equity — one that we took part of during our first years of marriage. It was one of the things that allowed me, not only to graduate grad school debt free, but also allowed us to have a significant savings account when we bought our first house.

As we have discussed in the past, renting out rooms and not just your whole house, is no excuse for not having a lease. If anything, when you have someone in your own house having a great lease is even more important. In many states you are still held to the same guidelines as renting a room as you would be for the whole house. The only difference is if your tenant is mad at you — now they literally know where you sleep.

The great thing about having a written agreement is it can reduce a lot of the ulcer-inducing moments. One of the biggest ways to prevent roommate problems is by discussing it ahead of time.

A large financial burden that I have noticed over the years is the increased costs of utilities. The division of utilities needs to be discussed ahead of time, and more importantly, to have in writing. Nothing counts unless it is in writing. 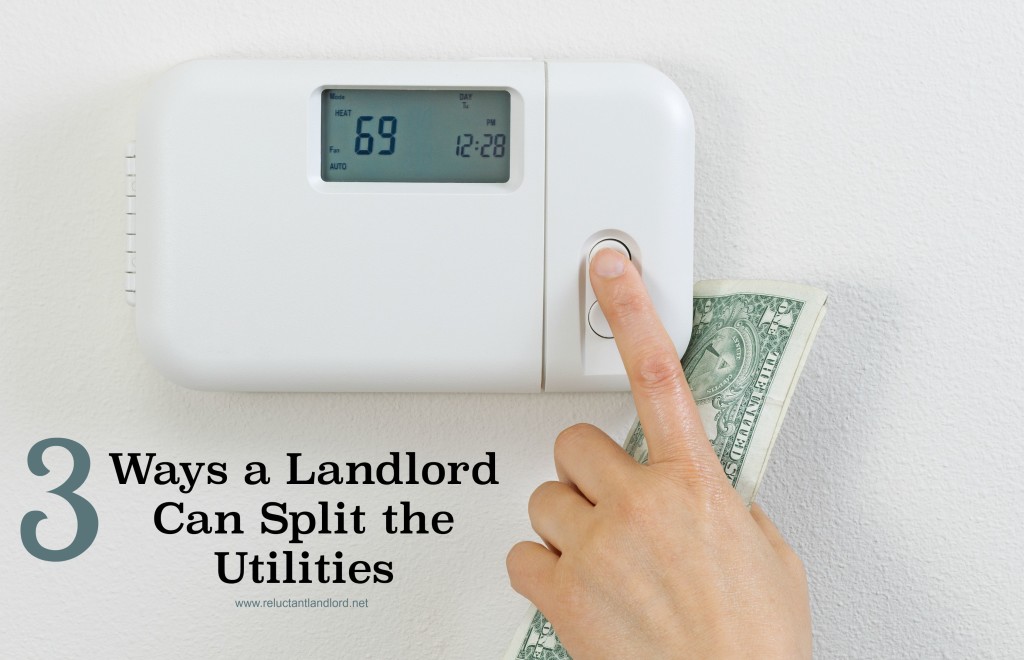 Over the years I have seen ways to address the costs of utilities.

1) Incorporate Utilities into the Rent – A lot of people simply charge roommates a flat fee and incorporate this into the rent. This is a great method because it is one price and no worries. It is also a very popular method. The biggest negative is that there is no incentive for tenants to be conservative with the utilities. This is how we did it when we were renting an in-law suite from the owner. It was also how we were going to address the utility cost when we had roommates. When we had roommates, I wrote down that the landlord controlled the thermostat and the current settings. This prevented any issues regarding temperature.

2) Split Utilities by Number of People – When we were renting during our first year of marriage, we split the utilities 60% to 40% since we were married and the other guy was single. This way we took into account that a married couple would have more expenditures a month because they lived there yet not an entire other person since air (etc.) wouldn’t change. This worked out great because our roommate had a steady girlfriend so division by number of people wouldn’t have been completely fair. I would use this especially if there is a division of common space.

3) Split of Space Usage – Charge them a portion of the bill based on their square footage. So if they were renting 400 sq. ft. of a 1,000 sq. ft. house that would be 40%. This is what I would do if I was renting out a completely separate space. An in-law suite that I didn’t want to do all inclusive (option 1) is a good example.  I have also heard of other landlords doing this when there are two separate units/tenants on one bill if code didn’t go against this practice.

There are lots of different practices for splitting utility costs. The biggest key is to know what your competition is doing. I have found that by looking at the Craigslist rooms for rent, I could get a good idea of of what people were doing in the different markets. Over the years of following different markets I have seen the following generalities/examples:

Renting a Room from the Owner – A flat rate price for utilities.

Splitting the House as a Roommate Group – Splitting utilities based on the number of occupants in the home.

In-Law Suite – Either a flat rate or a square footage split of utilities.

Multiple Units on One Meter System (usually a converted single family to multi family house) – This is where I see the square footage method used the most often.

As a landlord and home owner, I have noticed that in some areas (though not large metropolitan ones) tenants want flat rates when they rent a room. I have also found that people end up willing to pay significantly less when renting a room versus splitting with roommates. For example, they will only pay $500 to the landlord but are willing to split that same house with friends plus utilities. So keep that in mind when deciding whether or not it makes financial sense to rent out rooms in your house.

Do you rent out rooms in your house? How do you split the utilities?