You are here: Home / Lifestyle / 10 Amazing Things That Happened Because of Deployment

Deployment is hard, messy, scary and even tragic. While it is not something that everyone wants to do, it can still be a blessing in disguise. I am an optimist and I always try to find the silver lining. With that being said, here are 10 amazing things that came out of our last deployment. 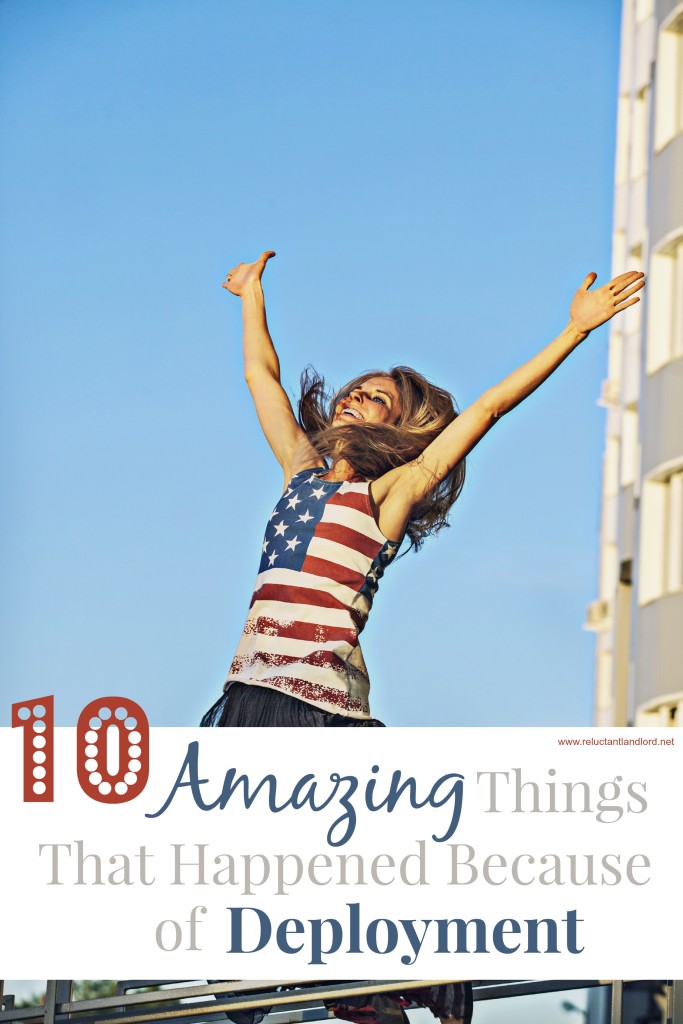 10 Ways This Deployment Turned Out to be Amazing

1. I Started a Blog.
I have always wanted to start a blog but never made it a priority even when I was off of work for 13 months. This deployment gave me a kick in the right direction to start a blog and it has been an amazing blessing. It has gone further than I ever imagined.

2. I Made Great Strives on Our Business.
We bought two more houses while my husband was deployed. This increased our rental business by 29%!

3. I Made Port Calls.
I had the chance to go to Bahrain, Singapore, and Abu Dabhi to meet my husband on a cruise. Not only was it an amazing opportunity to see new places, it also helped break up the separation. In our case, it became a “homecoming” every two months!

4. I Saved Money.
We were able to save up over $60,000 to put down on our houses. By living more simply through downsizing and living off of one income, we were able to put together a large cushion while still traveling. We also started to max out my husband’s TSP.

5. I Had the Entire Bed to Myself.
Between the cat and my husband, I have absolutely no bed space. Having the entire bed to myself while he was gone was luxurious!

6. I Traveled.
Since my husband was gone and I was lonely, I had a lot more time (and money) to travel. I went to Seattle to see friends over Thanksgiving, had a California tour with friends over Christmas, went to DC for Easter to see my grandparents, traveled to South Carolina to turn over a rental house, and went to my brother’s graduation at Cornell. It probably didn’t hurt that I only had to buy one ticket either!

7. I Learned to Become Self-Reliant.
I had never lived alone before, and we got married right after I graduated college. While I have always done the finances, I have never been on my own and self-reliant. This deployment gave me the opportunity to test out my own two feet with some very awesome support networks, which, let’s be honest here, I would never have survived without!

8. I  Started a New Career Position.
I was offered the opportunity to go back to work in my field the week after my husband deployed. This was after a two-year hiatus due to a PCS. Not only was this an awesome opportunity to focus on the job, the long hours that I put into being successful while he was gone, made the time fly.

9. I Learned to Put Myself Out There.
While I am outgoing in nature, I hate conflict. There were many people that had no idea I was a landlord or that I wanted to build a real estate empire. We rarely talked about our houses and very few people even knew we had any. Launching my blog was really putting myself out there and in doing so I met some absolutely amazing women!

10. I Learned to Accept Help.
Over the past 10 months I HAD to accept help. Even though we didn’t have kids, when the property manager was awful and the temperature in the house was in the low 50’s a friend’s husband was able to restart the light on the gas heater. I also had friends who have helped with my blog.  Without learning to lean on others, I would never have grown to where I am today!

Trust me there were lots of bad days crying myself to sleep. But even through though there was heartache, tears, and what felt like the end of the world, in reality it was just a small “blimp.”  The point is not to reflect on the bad times,  but to use them to grow. While I would never would have chosen to do a 10 month deployment it was one of the best things that ever happened to me.

What are your deployment goals? What did you do over during deployment?