I just got back from the most amazing trip ever to Bahrain to visit my husband. I know that this trip can be a little daunting, and even to experienced travelers, it had its moments. When I was looking for information while planning my trip, there wasn’t a lot out there. I decided to document my experience and share it here for others who may be about to head to Bahrain. I don’t want the unknown to prevent someone from taking this trip, because it was an amazing experience. 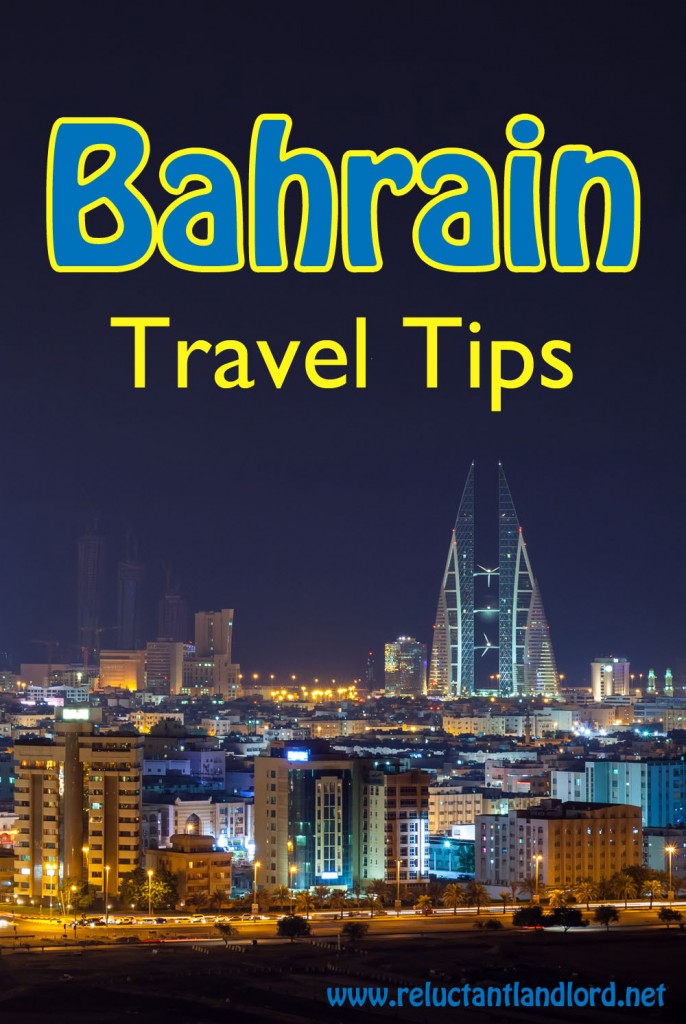 I flew from Los Angeles to Washington D.C., to Kuwait and then on to Bahrain. This was an absolutely great flight. My ticket was around $755 — bought less than two weeks out with United Airlines. The trip was easy and uneventful. While the part from Kuwait was a little daunting at first because I thought I was the only white woman, it actually was great. There were no issues, and it was a really comfortable flight.

Going through customs was very easy. Americans are required to buy a Visa, but you can do it right at customs. I believe it was 20 dinars. The strangest part was the fact that they take your passport to process it. This is supposedly only needed for the first time. It took about 15 minutes and was very strange, as I don’t like it when my passport is out of my possession.

We stayed at the Crown Plaza in the diplomat area. We know many people who stayed at the Diplomat, the Westin, and other area hotels. Honestly, any of the hotels would have been great. We stayed at the Crown Plaza because we had points and status. Location wise, I would stay at the Westin. It is attached to the City Central Mall. The malls were great, and it is an awesome way to wander around and stretch your legs. It cost us around $15 USD to get to the mall one way (5 dinar). Where we stayed, there wasn’t a lot of food so we tended to have to take a taxi every place we went. If we had stayed near the mall, it would have cut out some taxi use.

You want to take the red and white taxis as they run on a meter. They are called the “checkered cabs,” but that threw me off because it is definitely not what I would think about when referring to “checkered.” We had a few taxis that were a few dinars more expensive than the other rides but overall had no issues. The only thing I recommend is not to argue with the cabbies, even if they over charge you a little. That was a piece of advice the military had told the guys that I didn’t know about until I argued with a cabbie.

Also feel free to ask non-cabbies, “How much?” We had a few “drivers” that were at the hotel and not cabbies. We simply asked how much and then got into the car. It worked out really well!

Getting From the Airport to the Hotel

I hired a car from the airport when I arrived because I had heard so many stories of the cabbies taking foreigners for a ride and charging astronomical prices. I just went to the counter that you see on the way to the taxis and hired a ride. I definitely recommend you to ask both the counters. One wanted to charge me 17 dinar and the other counter was 10 dinar. Later, when we took a ride back to the airport they charged 6 dinars. I would definitely take a taxi, and don’t feel bad about asking how much if you are worried. On the other hand, if you take the red and white taxis you will be fine because they have to run the meter.

The exchange rate was around 2.6 to 1. While each good differed, I found that most of the goods were the same price as back home. So basically they were 2.6 times more expensive. So don’t plan on going shopping over here. I was able to get a skirt on sale from Espirit for the same price as back home on sale. On the other hand, the batteries and movies we bought on the economy were 2.6 times more expensive.

I got worried and exchanged money at the Dulles terminal. Surprise, surprise — I got an awful exchange rate. While I definitely recommend you getting money before you get to the taxi, I would just exchange at the airport in Manama OR just pull money out of the ATM. There were lots of ATMs, so exchanging money is easy!

I did some reading before I went over to make sure I would stay out of trouble. Everything I read said to have your arms covered and skirts should be over your knees. I went during the winter. Other than at Traders Vics located at the Ritz Carlton (a Western style hotel), everyone I saw followed this rule. So for walking around in public places, I definitely recommend you stay all covered up as you might feel out of place if you don’t.

While I certainly felt out of place with my red hair and white skin, I did not feel uncomfortable. When I traveled with my husband we did not hold hands or do any PDA. I let him take lead, and there were no problems!

There were lots of food places from every nationality. All the hotels had restaurants, along with the malls and stand-alone places. We ate in the malls and at a few different hotels. We had no issues. The food tasted a little different but was very good.

Things To Do in Bahrain

So we honestly didn’t do that much. The only thing that I had wanted to do was go to the Souk, and it was closed when we went at 3:30 in the afternoon. I was told later on the flight home that we simply went too early.  You need to go around 6 p.m. or later. So the next time we go back, we will definitely try that out!

We spent most of our exploring hours wondering the malls. They were huge and a lot of fun to wander around. We explored three of them.

The City Central Mall had more American fast food restaurants. It was large and has two hotels attached. It also has Karstadt, which is the grocery story hooked up to the mall. The grocery stores reminded me of a full Walmart. So if you need anything, you can find it there — from food to hygiene products to even some TVs and other household goods.

This was my favorite mall in relationship to food. There were a lot more restaurants and not as many chain American places. The restaurants were ones where you could sit down and they all had specialties. I really loved the Italian place on the first floor and the chocolate cafe. They also had a lot of activities for kids.

Things to Do with Kids

While we don’t have kids, the country seemed very kid-friendly. The City Central mall has a water park and mini arcade. The Sief mall seemed the most kid-friendly, though, as they had a lot of places for the kids to do arts and party projects on the third floor. It also had a place where you could drop your kid off to play while you wandered around. They even had toys for the kids to drive around the mall. From adults who were just walking around, it seemed to have a lot of kid activities. This is where I would take my kids for things to do!

Have you been to Bahrain? What are your tips and tricks?