You are here: Home / I am a Reluctant Landlord / Why I am a For-Profit Landlord

It’s a GOOD thing to be a successful Landlord!

I am successful and I advocate treating rental homes like the business that they are.  In-and-Out, Hobby Lobby, Target, and Panera are all successful businesses whose executive make a VERY pretty penny and no one is upset because they are successful.  Why would anyone have a problem with landlords making money? 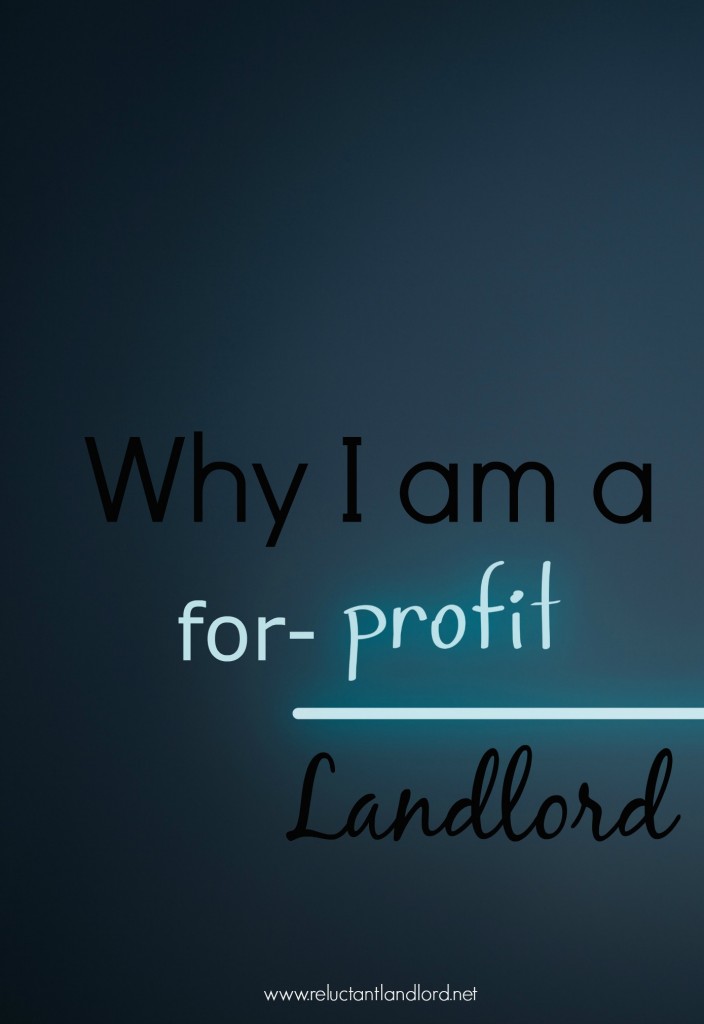 When we first started we were very touchy, feely NICE landlords. We had an absolutely horrid property manager. While there was many awesome experiences; my favorite was when our toilet over flowed and flooded an entire bedroom. When I called and asked the property manager for guidance she accused me of flushing my cell phone down the toilet. What I certainly enjoyed was when the plumber pointed out a 50 cent part that had failed.  It didn’t help that it was a  very stressful late night when everyone in the house had either work or finals (Grad School).  I SWORE I wasn’t going to be in this kind of situation when we started. That we would be kind and understanding landlords that everyone would love us because we were would be “nice” and “understanding”.

Guess What? Being Nice almost RUINED us:

I could go on and on! Here’s the thing. Do you know how many bad landlords I and my friends have bought houses from in the past 4 years? Landlords who let their house foreclosure or have had to short sale because they couldn’t cover the mortgage? How many more I have heard from a potential applicant that they were looking for a new home because their landlord was being foreclosed on? You know what kills me about that? When I  ask the applicant what they are paying, it usually is WELL under market rent.

If a landlord loses their house to bankruptcy and the tenant has to find a new house then who benefits from an under market rental?

Operating a house costs money! To be able to take care of it when the pipes burst or the roof leaks mean you need to have an “oh Shoot fund”.  It also means you have to make it worth someone’s time- they are allowed to make money too. For many of us we don’t expect to make a lot of money in the beginning but over time the profits will increase.

So Landlords, hold your heads up High! Have a

At the same time remember to treat others how you wish to be treated:

This is a business. It has to be mutually beneficial for everyone otherwise when the landlords fails the tenant loses too!

Why are you a landlord?