You are here: Home / I am a Reluctant Landlord / How to Gain Spousal Support

I am asked this question at least two or three times a week —  “What do you do when your spouse is not as on board or interested in rentals as you are?” Or in other words — “How do I gain spousal support?”

I can truly tell you that when we first got started my husband wanted NOTHING to do with buying houses. He was not interested and, while supportive, felt no need to be totally engaged or to participate. During our first primary home purchase, he didn’t even see the house until the day of closing. During our first rental purchase, he played Angry Birds through all of the showings. To say while he was supportive of my dreams he had no desire to be a homeowner is a little bit of an understatement. He would have been a renter forever if I had let him!

So how did we get from no houses to five houses with another three in the works in only three years? And how did my husband go from playing Angry Birds the whole time to being my biggest supporter and sometimes even more enthusiastic than me? 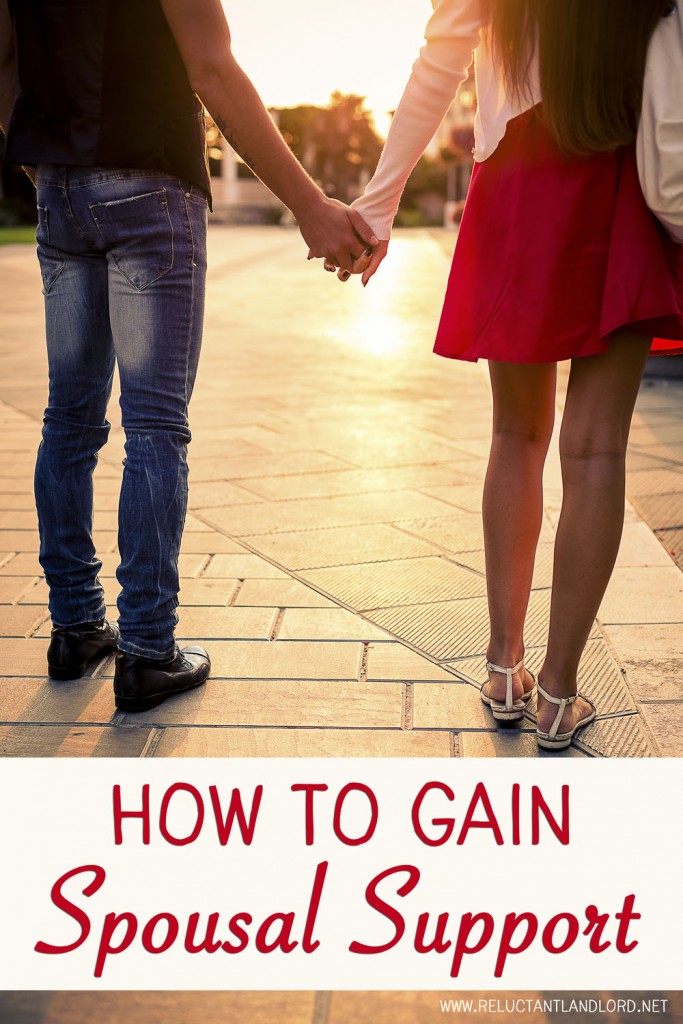 How to Get Spousal Support

The answer is baby steps!

It’s important to remember if your significant other wasn’t supportive regarding YOUR dreams, they wouldn’t be with you. Don’t misplace their nervousness in an investment source as being unsupportive. Most likely, they are simply uncomfortable. Therefore, the key is to make them comfortable.

We became comfortable with the idea of landlording toward our retirement through baby steps.

After four years of flight school, my husband was very comfortable with what goes into blowing stuff up, but getting a house made him uncomfortable. On the other hand, every time I read about a downed aircraft, I go into a tizzy. Yet with an MBA and background in Finance/Accounting, what calms my nerves is shopping for houses and making offers. I have been known to look at MLS home listings before a big interview. It was better than any Xanax!

Remember that you and your spouse probably come from very different backgrounds. Most of us are ying and yang. The key is to illustrate the appeal to the other person in a positive light!

While 10-month deployments and moving every three years does not appeal to me, supporting my husband’s dream does! On the other hand, owning 10 houses doesn’t appeal to my husband, but me being able to have a business while we raise our family and later having the cash flow to fund sailing around the world during early retirement — that does to him.

Use baby steps to gain spousal support. You don’t go from being bored to being the President of the United States. When presenting the idea to your significant other, don’t begin by telling them you want to own 30 houses. That can be overwhelming.

We instead came up with the agreement to work in baby steps. For us, that became a two-pronged attack!

The first way was by attacking each problem as they occurred.

1. We bought a primary property with a VA loan — no money down, but we had a healthy emergency fund. While we had our moments (laundry room needing an entire re-plumb the first night in the house), they were all successful outcomes. So our ability to handle it was proven. (Thank goodness for a handy husband in this case!)

2. We bought our first pure investment property six hours away. It was nerve wrecking and scary, but it was a baby-step. We successfully placed a tenant and were able to self-manage on our own even when finding a property manager fell through. Therefore, not only were we successful but we were successful when things didn’t go according to plan.

3. We successfully navigated last minute impending disasters. These all occurred at the same time: a pcs (move for a new job), a fourth house purchase, two sets of tenants broke their leases, and I lost my income — which was 40% of our family’s pay! We dodged the bullets through careful planning and preparation.

Remember it isn’t so much about things always going right, but how you handle them when it goes wrong. Your spouse is worried about worst case scenarios, not best case! So when you prove (not through words, but actions) to them that you guys can handle all types of events, they will be more comfortable.

The second thing we did was discuss TOGETHER why we are investing.

1. Remember the key in marriage and finances is for BOTH spouses to be on board. I wanted to invest in real estate for financial freedom and the ability to be secure when we retired. When I told that to my husband the first time it didn’t mean anything to him.

His dream was sailing around the world, but it didn’t seem attainable. So when we started talking about our future, because I am the ultimate planner, I realized that we could sail around the world if we had the cash flow from a successful portfolio. Now our dreams, though very different, were married! We both had something that fueled each other’s dreams!

2. It is important to keep your expectations in check! You will not always be equal partners. My husband built a boat in the garage. I totally helped to the point that I was accused of being a blue smurfette because I am not a clean painter. Or the fact that I discovered that I am “highly” allergic to fiber glass dust after turning into a red smurfette with a rash over my entire body. My energy toward the boat project was only 20%. I am supportive but he takes lead. So don’t expect your spouse to match you 100% in your interests. Be supportive and go from there!

Together you will conquer the world, whether it is REAL ESTATE or anything else you put your mind to!

What has been your experience?