You are here: Home / Lifestyle / How I Graduated From Grad School Debt-Free!

After my husband and I were married at 22 and 23, we moved to Corpus Christi located in South Texas where my husband was stationed for flight school. Unfortunately I graduated in 2010, in the middle of the recession so finding a job in Corpus Christi in my field was impossible, especially as a military wife. At the time I had no desire to move elsewhere for a position. As a planner, I simply moved on to plan B.

One of the best pieces of advice I took from my parents was to pursue a Master’s degree. Those 13 months were certainly not the best months of my life, but my Master’s degree has been an asset that has kept on giving.

It was the reason why I landed my first job out of college, and also the reason that my current position hired me with only two years of experience when they desired at least ten. I was blessed not only in having my Master’s degree at 23, but also to graduate from graduate school debt-free.

At the time, graduating debt-free appeared to be the only way to graduate from school. Over the years, I have found that many people would love to get a Master’s degree, but graduating debt-free is seemly unattainable. While I am the first to acknowledge we did have some help with tuition payments because I used leftover college money my husband had, the true reason for graduating debt-free was hard work and a lot of planning. Here’s how I did it… 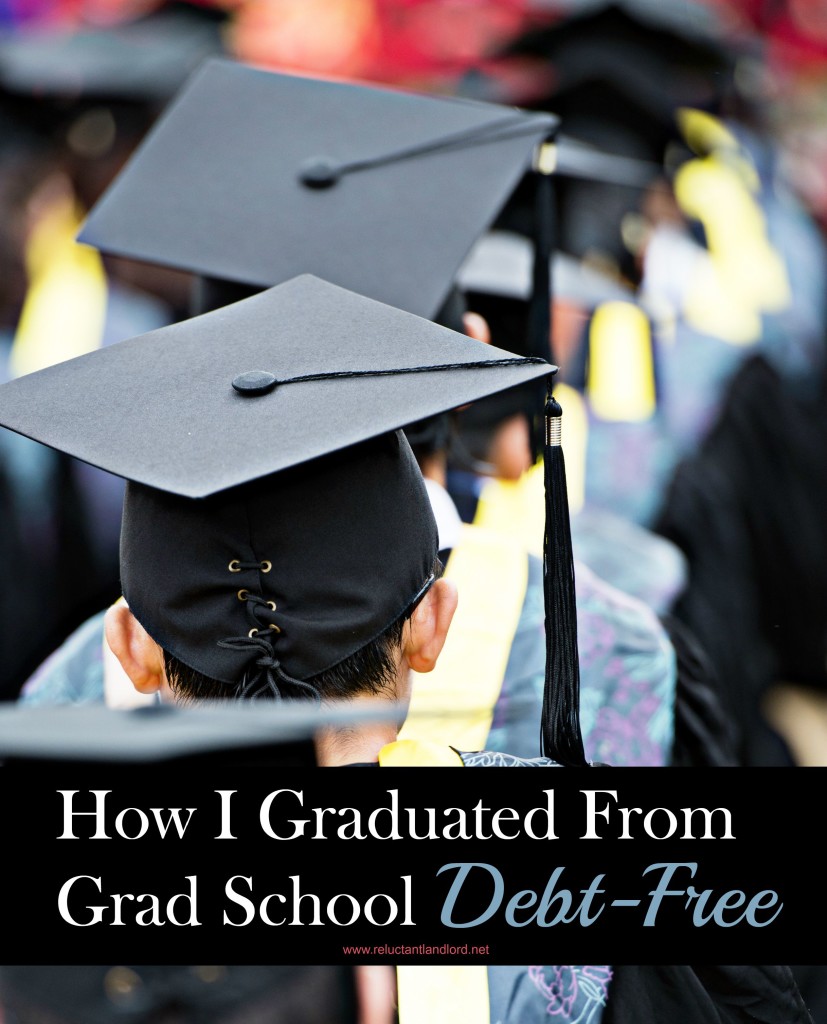 How to Graduate From Grad School Debt-Free

1. Choose an in-State School’s Offshoot Campus.
I had the distinct honor of graduating from Texas A&M in Corpus Christi. Although you could argue that I didn’t graduate from the main campus or college station, I still have the name and it was significantly cheaper. If I remember correctly my degree was $8,000 versus $20,000 if I had gone to the main campus.

2. Apply for the in-State Program.
I was blessed that Texas honored my husband’s orders and allowed us to be considered in-state as long as our orders were there. It was a pain to get all the paperwork in order, but it was worth it.

3. Apply For TA Programs Even if It’s Not Your Major.
One of the best things I did was apply for a freshman TA program. While it was not in my major, I still received the position and it was a huge asset as it covered my tuition costs.

4. Work During Grad School.
I know many people who didn’t work during grad school but for us it was one of the biggest keys to my success. I did the TA job the first half and worked the second half. It allowed me to still bring in an income to help cover our bills.

5. Be Willing to Sacrifice Your Social Life.
I finished my grad program in 13 months. While many of our acquaintances were out having fun I was either studying, working, sleeping or hanging out with the husband.

6. Grades or Debt-Free?
I know I didn’t get as good of grades as I would have had I not been working full time. While this won’t be the best choice for everyone, for me it was worth it. My grades have never been the reason I haven’t gotten a job. On the other hand, not having any school debt AND being able to get started after grad school with $17,000 in the bank was why we have been able to build our real estate empire so quickly.

While graduate school is not for everyone, for me it has been the reason why I have been so successful on my current path. With a little out of the box thinking, and a lot of flexibility, it is possible to achieve your dream, without achieving a mound of mound of debt.

What has been your experience with grad school?