You are here: Home / I am a Reluctant Landlord / How to Minimize the SCRA Risk When Renting to Military Families

I am a proud military spouse and truly understand what being a military spouse means in regards to PCS season. Not only have we totally done that last minute move (can anyone say 7 days notice?), but I am an empire building landlord with six personal rentals and ten that I manage.

As a small business owner whose business is rentals there are some important mainstays that keep me on the road to success. A few of these are keeping vacancy low, keeping the houses filled with great tenants, and keeping maintenance issues down. We buy houses with as little to no money down in them, so our margins are very low. This makes controlling costs even more important.

That being said, owning rentals is a business. I have had some bad experiences with military personnel not being transparent and honest about when they planned on departing (knowingly). I love to support our military and rent to any I can when they qualify and can stay for at least 12 months. but I cannot put my families finances in jeopardy because of a tenant (military or not). Yes, it is true that military have secure positions, stay for longer periods of time, and pay on time, but the same can be said for all of my other civilian tenants. 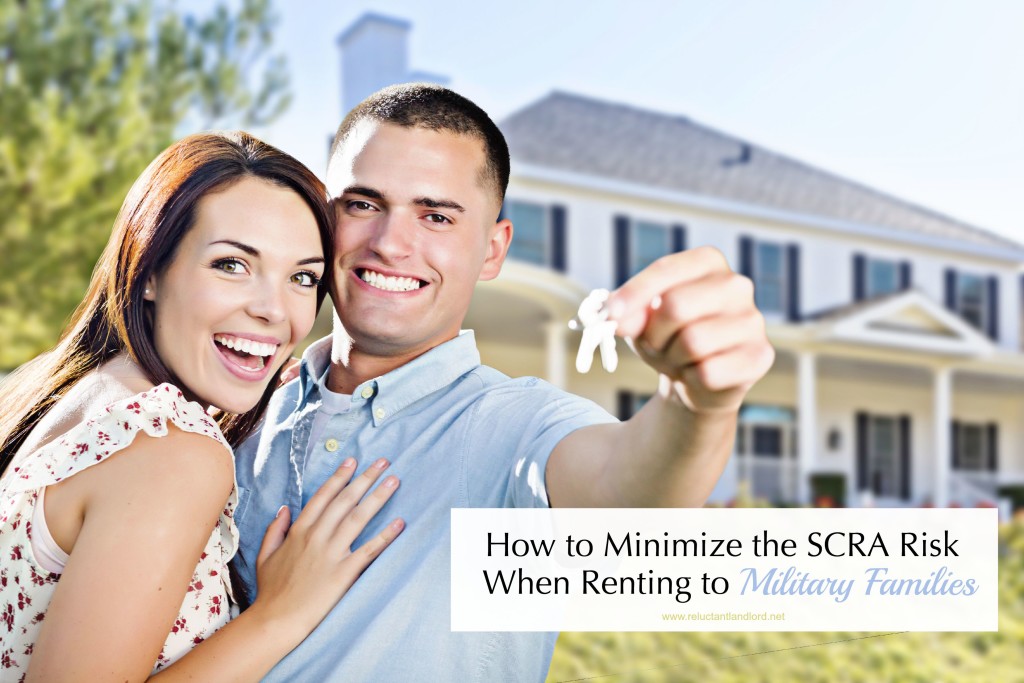 The difference is the SCRA (described in 3 ways to break the lease under the SCRA), which allows service members to break the lease. I have seen many other militiary friends (landlords) left financially burdened because someone took advantage of the SCRA.

And I could go on!

Renting to military is very rewarding simply because I like taking care of my own. With that being said, and because I am a huge advocate for treating this like a business, I have several tricks to make sure that I as the Landlord am protected.

1. Don’t do Leases for Longer Than 12 Months
I don’t do longer than a 12 month lease for the first lease. I have found that the only person this locks the lease into is me, the landlord. While technically it provides me with a long-term tenant, in reality I have not had one person try to break the lease in one fashion or another.

2. Don’t Provide a Rental Discount or other Incentives
One of the largest issues is that military members sign longer leases for discounts even though they know they can’t fulfill them. There is no SCRA penalty for this. I don’t provide a discount anymore because I have been burned too many times.

3. Request Orders and ask them to Match Lease Length
While I have been told that not every member can provide their orders, I personally have had no issues asking for and being provided orders. I check the orders to make sure that the applicant is not on TDY (yup it happens) or signing a longer lease than their orders date.

4. Research and Ask If and When the Unit is Deploying and Tenants Intentions
Two of my three rental locations are in a high sea duty location so I try to keep up on deployment rotations which lets me have a better idea. For example: Three roommates who are leaving on the ship in three months probably won’t be staying for longer. A group that just got back and signed a two-year lease is probably staying the entire time. These cycles are just something you will get to know by being active in your community.

5. Know Your Local and State Laws Regarding the SCRA
Make sure you know your local laws. Some states such as Florida have much more flexible terms than others like California. Here is a list of places to check for your local state requirements.

6. Have a Break Lease Clause
I have found that a lot of my tenants want to break the lease to buy a house or other reasons that don’t follow under the SCRA. Therefore I have put a break lease clause in my lease. This allows me an out.

7. Hold Tenants Feet to the Fire for Proper Notification
The SCRA does provide a proper way to give notice to allow you, the landlord, the most amount of time to fill your property. Follow it exactly and require your tenants to do the same. One of  the biggest mistakes I have seen is people being too nice and then losing their shirt. This causes them ultimately to get out of the landlord business with a bad taste in their mouth. Follow the law exactly, there are protections in place for you, USE THEM!!

These ideas and thoughts are certainly not for everyone. I have noticed over the years there are a lot more flexible landlords and stricter landlords than I. I have noticed there are landlords who don’t bother saying that SCRA break lease is life and others won’t rent to military after 3 + SCRA break leases in one year.  For us this is a marathon; not a sprint, being a landlord is something that is going to be are early retirement investment and the reason for success. Therefore we must be able to be landlords long term.

The point of this isn’t to penalize one group or another it simply is to make sure that everyone including the landlord goes into this with eyes open. I have had some simply AMAZING military tenants. These ideas are just what seems to be my happy medium. I totally understand that life changes and I try to accommodate the best I can. I simply want everyone to have the same “skin in the game” and make sure that when people sign my contract they have every intentions of fulfilling it. This is the best way I can make sure that I am protected.

What have you noticed over the years? What are your thoughts?