You are here: Home / I am a Reluctant Landlord / Why I don’t Allow my Tenants to do Repairs Around the Home

I’ve heard from a lot of other landlords that they pay their tenants to do repairs instead of hiring a professional. As a wife with a super handy husband (he built a boat from scratch!), and a landlord with six rentals and managing ten, I truly can see both sides. 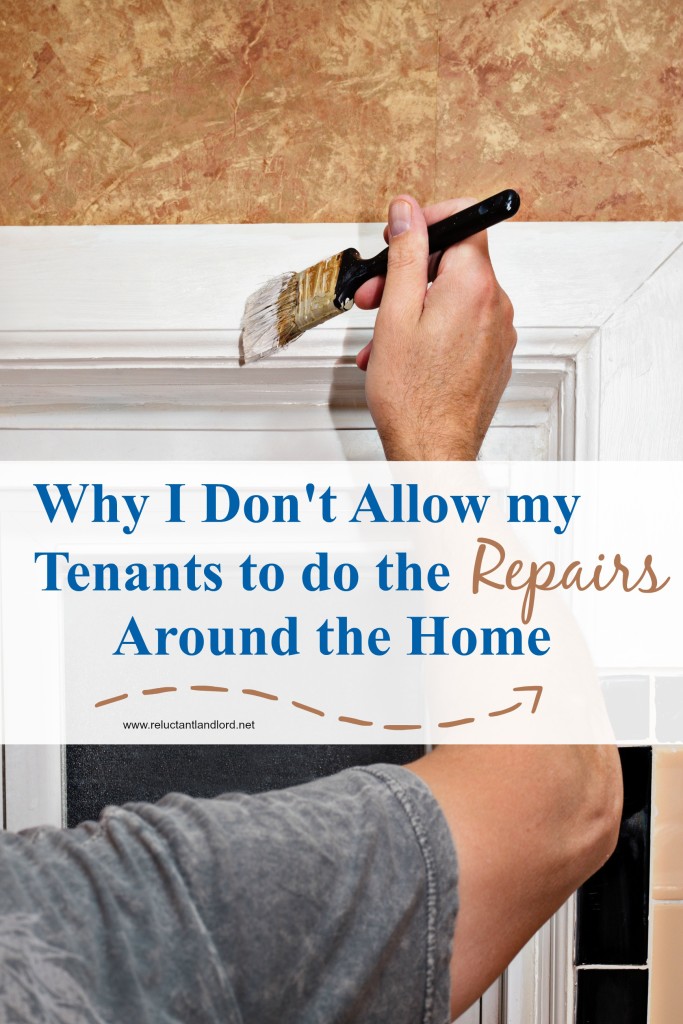 I remember when we rented a home in Texas. Our roommate’s room flooded when a $2.00 seal broke in the toilet and the property manager was just awful. We called to let her know what happened and she accused us of flushing our cell phones down the toilet!

Later, once she believed us, she hired a plumber who cost our landlord a couple hundred dollars. That was so ridiculous. Not only did it cost the landlord a small fortune, but I had to take an entire day off over something my husband could have easily done! It was that point that I SWORE I would never be “that” landlord. Three Years later, I am “that” landlord, except if you call me and say something breaks I promise I wont accuse you flushing your cell phone down the toilet!

I have become jaded however, because of unfortunate past experiences. Unless the tenant is assuming the cost and liability of the repair, I do not allow the tenant to do a repair. Instead, I hire the repair out with my vendor. While the typical liability comes into mind, something I didn’t consider at the time but now plays into my reasons.

Allowing tenants to help, puts you as the landlord in a difficult position. I have found that while tenants have the best of intentions, human nature comes into play way too often! Six months ago one of my tenants told me there was no need to hire a handyman to paint, they could do it themselves. But during move out inspection there was a HUGE white spot on a brown wall from where they didn’t finish the work.

As a landlord, there is nothing I can do in this situation. I can’t easily remove payment from the security deposit nor am I prepared to paint the wall. At the time it seemed like an easy thought. Allow the tenant to repair the home and save money!

One of our first few tenants was a couple that chose to do the repairs around the house. We split the cost with them and in my mind they were the perfect tenants. Later we ended up letting them out of their lease with only 10 days notice because they had bought a house. They had been AWESOME tenants so it seem to be the right thing to do at the time. They left the house in a disgusting state and lots of things were broken. They didn’t feel any responsibility because they said they had fixed up the house for us, even though we had paid them every time.

When I crossed the line between landlord and tenant it bit us in the butt, because now we “owed” them something even though they were paid for their time. Now we don’t provide monetary rewards for tenants who complete repairs or services themselves any more. This couple was the catalyst as to why we are such strict landlords.

Now there are some tenants out there that do repairs themselves and never call their landlord. They are treating it like a home. The thing is, at least in the areas I operate, those who want to be homeowners buy a home. Rent is WAY more expensive than a mortgage so those who don’t want to be homeowners are typically renters or are renters for a reason.

That is why I have a repair deductible. I expect to repair things when the break and it is just easier if I do not mix the two. There are days I would kill for my tenant to do repair it themselves. Times when I am paying what feels like $500 for a one hour, easy repair, but that is the cost of doing business. If my tenant does the repair themselves that’s great, but if they call me I organize a vender.

What has your experience been? Do you compensate tenants for repairs?